The Washington Post recently released a front-page article claiming that "The federal government wants to create super WiFi networks across the nation...Cities support the idea because the networks would lower costs for schools and businesses or help vacationers easily find tourist spots. Consumer advocates note the benefits to the poor, who often cannot afford high cellphone and Internet bills."

I will not comment on whether this is a true or false statement, however I am at the CASA office in Tottenham court road and right now i am probably within the range of more than 100 sending and receiving signals. From mobile phones, to wireless networks, to the Geiger counter which measures radiation levels and shows results real-time via CASA’s online webpage “CityDashboard”. Sensors have come to realize a new urban landscape. A new locality which is not however making a realized dialogue with the physical environment... However, there are side-effects.

Wireless in the world from Timo on Vimeo.

"This new urban landscape is no longer predicated solely on architecture and urbanism. These disciplines now embrace emerging methodologies that bend the physical with new measures, representations and maps of urban dynamics such as traffic or mobile phone flows. Representations of usage patterns and mapping the life of the city amplify our collective awareness of the urban environment as a living organism. These soft and invisible architectures fashion sentient and reactive environments."(1)

In that sense, Urban transformations may not result merely from "changing economic and social drivers within and around densely populated areas" (2), but from a more abstract distortion of time and space. Utopian Architects and planners predicted from a very early age that future cities would not only be defined by buildings and streets, but also by different flows of information. It is now widely accepted that citizens would have to live in a constant flux and there is a need for identifying the possible effects of these new systems, as they are potentially new constituencies for the development of planning.

The introduction of open real-time data may aid in the development of new scenarios and a hint that we are leading in this direction is the recent interest in crowdourcing data analysis and visualizations e.g. the Twitter API which is one of the most popular APIs for visualizations. There are now over 50 Twitter visualizations. "These applications mine Tweets to provide services that help users track topics of interest, geolocated Tweets and are even used to predict flu outbreaks".(2) 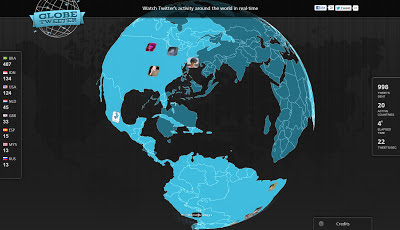 
We are officially living in hybrid environments where space and flowing data interact with each other. At the same time, the ways in which we perceive this information plays an important role on our understanding about the environment we live in and therefore affects decision making. The realization of such an era is certainly important for the development of new solutions.

Speaking about invisible fields, Stefan Berke and Martin Hunniger thought of sound as Anthony DeVincenzi (invisible forces) thought of fields. This is a project were midi notes drive the creation of an openGL shader, seeking new aspects in the 3d visualization of invisible fields.